“One Bad Apple” – How My Words Are No Longer Mine Alone

The worst part of being plagiarized is the feeling of isolation. You discover your words on another blog. Then come the inevitable questions. What do you do? Do you tell someone? Do you confront the plagiarist privately? Do you alert the community publicly? Should you choose to expose the plagiarist, you run the risk of being called all manner of names. ‘Bitch’. ‘Bully’. ‘Crazy’. ‘Jealous’. Pick an adjective, any adjective! Should you choose to say nothing at all, you allow someone to continue to steal your work without credit or consequence, all while you internalize your own feelings of frustration, resentment and anger. There are no ‘right’ or easy answers. You are the inevitable loser in a game you never agreed to play.

Book blogging has changed my life for the better. I have often spoken at length about how grateful I am to be a part of such a wonderful, powerful, supportive community. About the opportunities book blogging has afforded me and how much it has given me, most notable of which are the life-changing friendships I now can’t imagine my life without. I have been welcomed, accepted and embraced at every turn, and have been able to hone my own writing in this tiny corner of the internet I call my own. What the community is not, however, is perfect.

Plagiarism in the book blogging community is certainly nothing new. Two notable instances were The Story Siren incident (1 ● 2 ● 3) and more recently the case of Samantha Reed (1), as helpfully and explicitly outlined by Cuddlebuggery. I just never thought it would happen to me.

Here’s the truth: For more than three months now, a fellow blogger, Talina at Sassy and Dangerous, has been plagiarizing portions of posts I’ve shared on Pop! Goes The Reader. This plagiarism was insidious in its subtlety. It was never word-for-word. It was a sentence here, a sentence there. Small enough to allow for plausible deniability should it ever come to light. Large enough that friends began to notice the similarity between our two blogs, each of my posts having been written days, weeks, or even months prior to hers. My words. My voice. No longer mine alone.

At first, I told no-one, save for a few close friends. Each time this happened, I consulted with them, sharing my original post and Talina’s subsequent one, double-checking to see whether this was all in my head. Self-doubt is the lovely parting gift of the plagiarist. Am I imagining things? Am I overreacting? Am I being too sensitive? Is this really happening? In retrospect, I think I wanted to believe that it was all a mistake or a misunderstanding because were this true I wouldn’t have to acknowledge that it was happening or confront the problem head-on.

I bring this up now not to hurt Talina’s feelings or publicly shame her. I do this because I’m concerned that I might not be the only one she has lifted passages from. In most cases, plagiarism is very rarely an isolated incident or limited to a single source. I can continue to check for my own content but others should have the knowledge and the ability to protect themselves as well. Based on the most recent correspondence I received from Talina yesterday, she has no remorse for what she has done, nor has any intention to change or curb her behaviour. I don’t know what else to do.

Please Note: Talina made a point of editing a great number of these posts, which she freely admits to in the emails I have included below, after I sent her my initial email with my concerns on October 20, 2015. I was careful to take screenshots before she could re-write them. 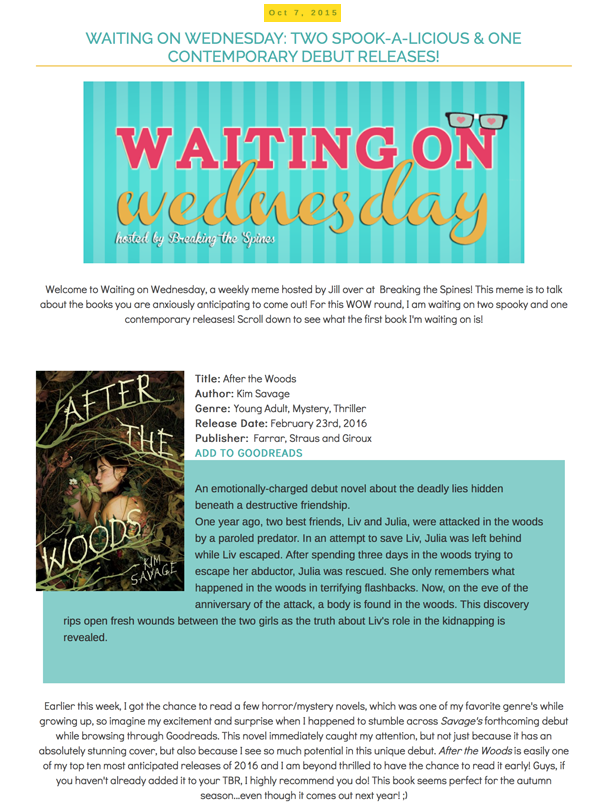 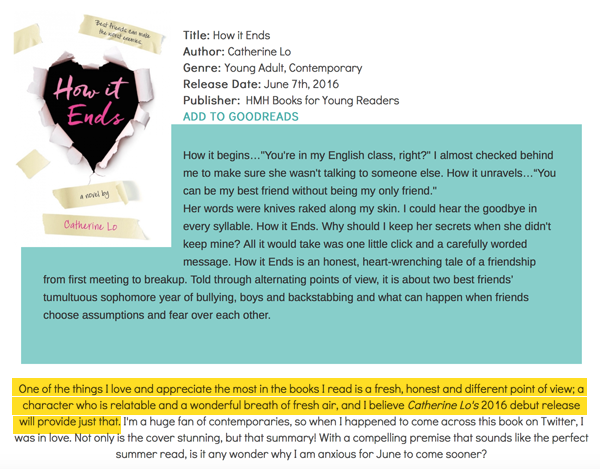 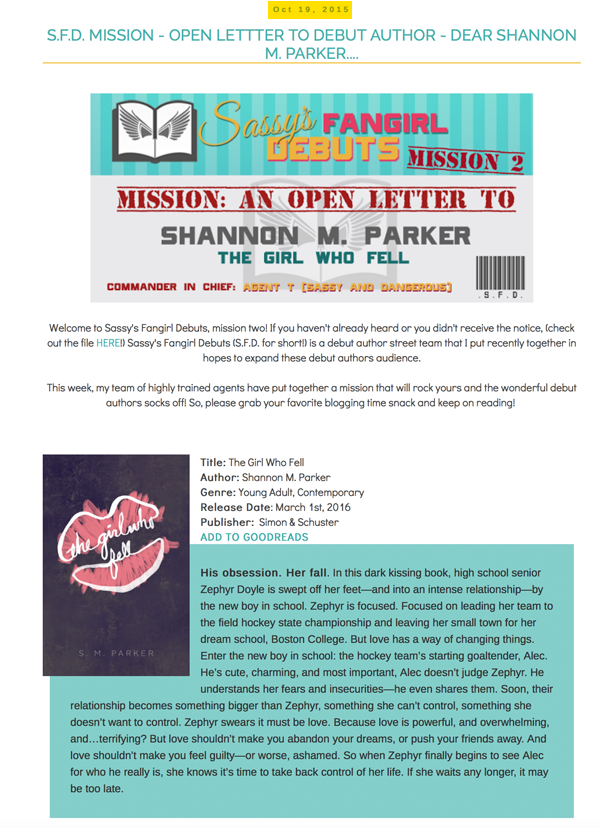 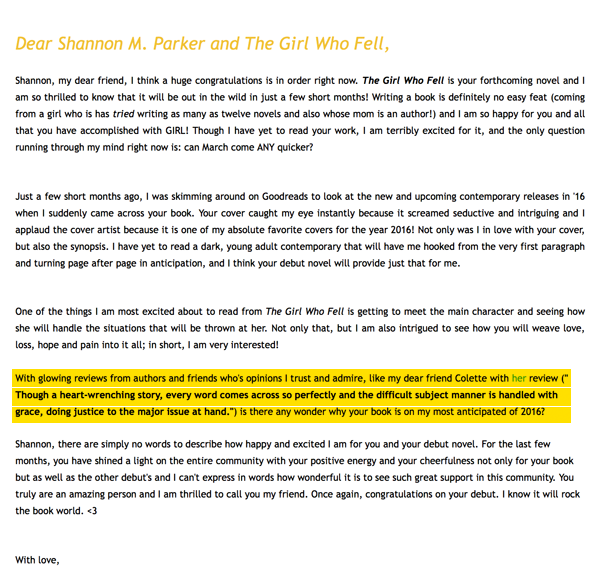 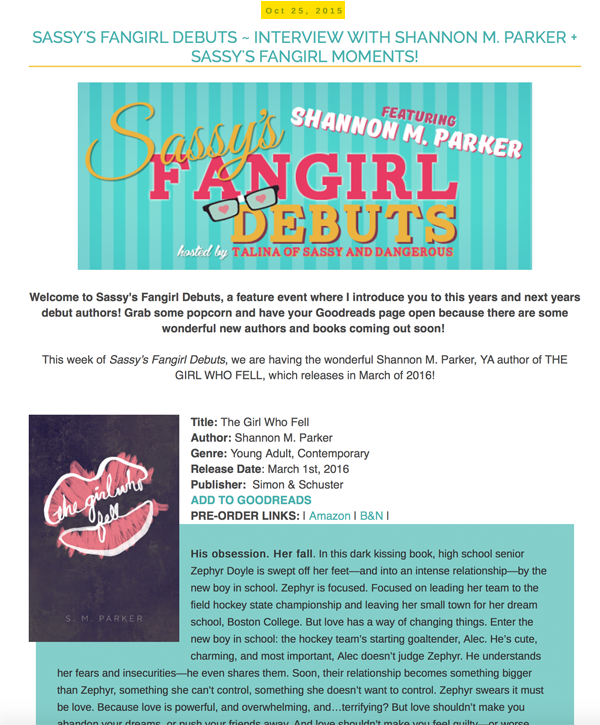 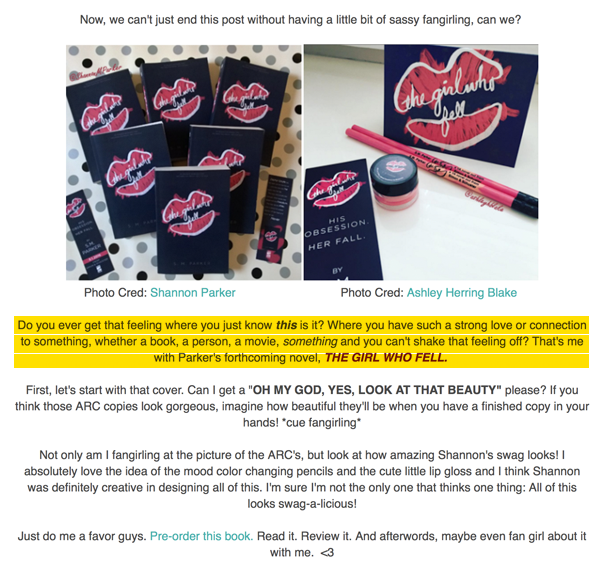 THE CONFRONTATION: PART I

I was frustrated, angry and hurt. I dedicate hours to Pop! Goes The Reader’s maintenance each day, carefully choosing just the right words to convey what I’m feeling about a book I’m reading or a release I’m looking forward to. To see my posts scavenged for parts, my hard work passed off as someone else’s, was demoralizing. That said, I didn’t want to make a fuss. I didn’t want to blow things out of proportion. I wanted to resolve things kindly and privately so that no further harm was done. I wasn’t interested in publicly shaming or bullying anyone. I simply took screen-captures of each occurrence and emailed Talina with my concerns on October 20, 2015.

My First Email To Talina 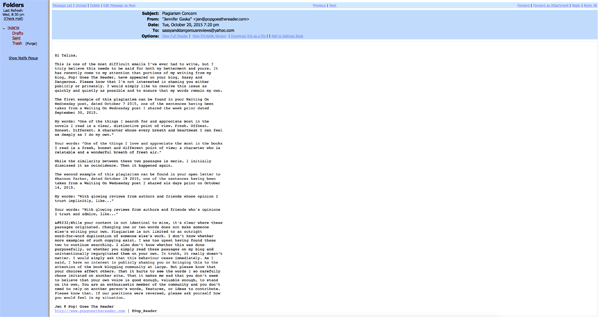 I received two emails from Talina in response on October 20, 2015, later that same day.

“I now see the close resemblance even though our words are written out differently.”

“I apologize deeply if you think I did this intentionally, which is not the case. “

“I will immediately go in and edit my words better as to where our sentences don’t resemble.”

“From now on, I will absolutely be more careful of my words.”

“…Just in case someone else had a resemblance to my own sentences.”

This final excerpt from her email is perhaps my favourite. Despite the fact that I had proven definitively that each of my posts were written and published prior to hers, Talina attempts to make it seem as though my sentences are the ones that resemble hers, and not vice versa.

“I have just edited and worded my sentences were it does not resemble anymore.”

“I hope you understand that I never plagiarized you or anyone else intentionally.”

Please keep these hollow apologies and promises to change in mind. Trust me. We’ll have a good laugh about this later.

November passed quietly. I was happy and, most of all, relieved. I have always tried to be a positive force in the community and never wanted to become embroiled in anything like this. I thought the situation was resolved. Apparently, I was wrong.

On Wednesday, December 9, 2015, Talina’s latest Waiting On Wednesday post was re-tweeted on my Twitter timeline. I had previously stopped checking her blog for my own mental health, tired of anxiously checking for signs of plagiarism and compiling evidence just in case. You can therefore imagine my disappointment when I decided to check Talina’s latest post and found that my hope and trust in her sincerity had been grossly misplaced.

It was small, but it was there. That familiar cadence and structure. On its own, the similarities in our two posts are something I might otherwise have dismissed as a simple coincidence, had I not seen it done on at least three occasions before.

Talina’s Waiting On Wednesday On December 9, 2015 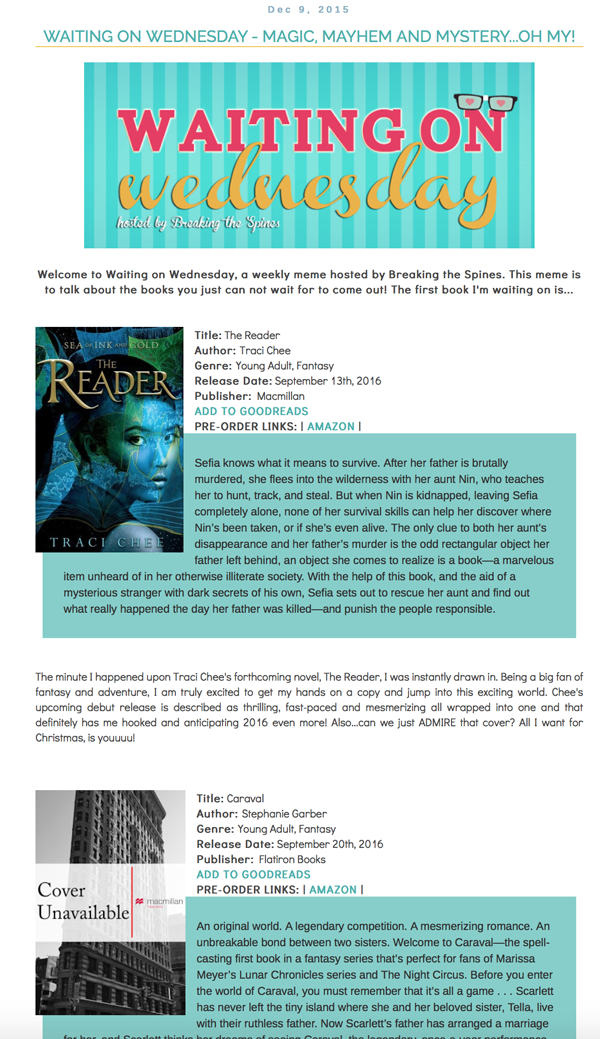 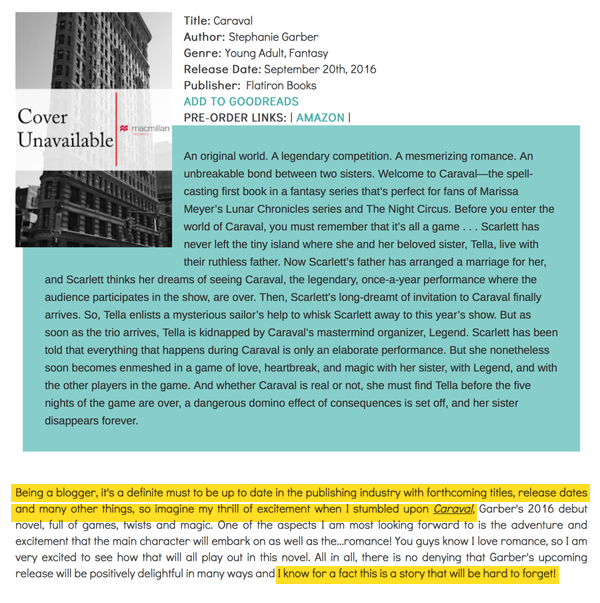 Why was Talina discussing forthcoming titles and release dates in this post? How was it relevant to the post as a whole? In my original Waiting On Wednesday post, I brought up familiarity with the industry and forthcoming titles in relation to how rare it is that I am now able to discover a book on my own without first hearing about it from a publicist, author or blogger. Talina lifts portions of this discussion without any connective thread or context. It simply makes no sense.

When I saw that Talina had returned to Pop! Goes The Reader and was once again mimicking the structure of my paragraphs, my arguments, and my thoughts despite numerous apologies and promises to ‘be more careful’ in the future, that was the final straw. I felt like I was being taken advantage of. After all, I had stressed to Talina that I wasn’t interested in publicly shaming her or bringing this to the community’s attention if I didn’t need to. With no incentive to stop and no consequences for her actions, however, what was to stop her from continuing to plagiarize my work in the future?

Still, I wanted to give her one final chance to change. One final warning before I would be forced to reveal this, because I couldn’t bear to keep it all inside any longer. I wrote one, final email later that same day, on Wednesday, December 9, 2015. 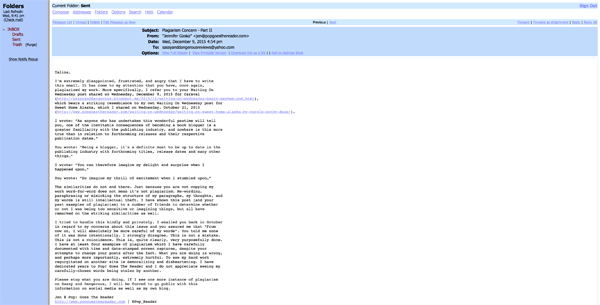 This time, however, Talina was singing a very different tune. Gone were the profuse apologies, the promises for change, the careful editing of her posts in order to cover her tracks after I contacted her with my concerns. But if Talina did nothing wrong, as she claims, if she was ‘in no way plagiarizing me’, why did she previously send two emails riddled with apologies? Why did she feel the need to edit her posts after I originally confronted her about this issue back in October?

In response to all that had transpired, a close friend of mine who is also an author (and wishes to remain unnamed) decided to withdraw her novel from Talina’s “Sassy’s Fangirl Debuts” event. This was part of the response my friend received from Talina, including some accusations against my character for good measure.

“…A few bad apples tends to spoil the barrel. That’s a saying my mother taught me. If you’ve been a part of the YA blogging community for any time you’ll understand when I say that it comes with a negative side of envy, jealousy and hate. I try not to let it bother me and I pay 100% of no attention to anyone that thinks I copy them. Why? Because I have nothing to prove…(I) have no time to worry about the negative people trying to throw boulder in my path.”

Well, there you have it, I guess. I’m a ‘bad apple’ who is spoiling the barrel. I’m mean. I’m negative. And, apparently, I’m just jealous. Of what, I have no idea. Statistically-speaking, Pop! Goes The Reader has twice the number of Twitter and Bloglovin’ followers when compared to Sassy and Dangerous but apparently this all comes down to my ‘envy, jealousy, and hate’. Nothing to see here, folks! Just a blogger who has nothing better to do than spend her time picking fights with another blogger and spending hours compiling evidence and writing a post about it. It’s not as though I would rather spend my time doing literally anything else, right?

Believe it or not, Talina, I’m not negative. I’m not mean (well, most of the time, anyway). I’m not jealous. What I am is tired. Tired of being put in this awful position. Tired of keeping this all to myself. Tired of suffering in silence while you take credit for my work. Tired of listening to denials, qualifications, arguments about intent and coincidence.

No amount of ARCS, pageviews, posts, deadlines, commitments, or notoriety excuse plagiarism. Plagiarism is deliberate, plagiarism is intentional and plagiarism is hurtful, both to those from whom you’ve stolen and to yourself. In an online community which is defined by its diversity and inclusivity, you do not need to steal another’s words or mimic another’s voice in order to be heard. There is room for all of us at the table, but only if we have the courage to be ourselves.