Her Story: Ladies In Literature with Kathleen Burkinshaw 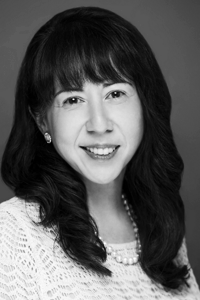 Kathleen Burkinshaw resides in Charlotte, NC. She’s a wife, mom to a daughter in college, and dreading the reality of being an empty nester (most of the time), and owns a dog who is a kitchen ninja. She also advocates for Reflex Sympathetic Dystrophy research. Writing has given her an outlet for her daily struggle with chronic pain. Writing historical fiction satisfies her OCD tendencies to research anything and everything.

Kathleen’s debut novel, The Last Cherry Blossom (Sky Pony Press, August 4, 2016), is upper middle grade historical fiction. The Last Cherry Blossom gives a glimpse into a 12 year old girl’s daily life in Hiroshima during the last year of World War II. Shocking family secrets are revealed just as her entire world is about to ignite and become a shadow of what it had been. This historical fiction novel is based on her mother’s life in Hiroshima.

Once a week, I would come home with as many books that the library allowed me to check out. There were Nancy Drew mysteries (Oh, how I wanted a roadster for my first car – although I think she now drives a Prius), Judy Blume books, Little Women, and some of the teen romances of the day. However, one book stood out to me at that time and once again when my own daughter was four years old.

I must admit that I had watched the film A Little Princess with Shirley Temple (It was on one of those TV Sunday Matinees in the late 70s – I’m old but not that old) before I read the book. But after watching the movie, I had to read the book.

As an only child in my awkward early teen years I spent a lot of time in my room reading. Sara Crewe stood out to me because no matter what situation she was in – whether she was a rich student with a doting father, or a suddenly orphaned scullery maid she had a kind soul. She had the ability to put people at ease and to know when someone needed help. When things took a turn and she was forced to give up her education and live in the attic as a servant, she mourned, but was determined to make it somehow. But her imagination and ability to whisk people away when she told a story so they could forget their worries or sadness for a while, stuck with me.

So fast forward to my early 30s – I had spent a month in the hospital followed by a few more visits over the next fifteen months. I nearly died from a deep vein thrombosis, and as a result from nerve damage, I had been diagnosed with Reflex Sympathetic Dystrophy, a neurological chronic pain disease. I could not really walk much and was pretty weak. However, my four year old daughter would sit on the bed with me where we played with her dolls and I read to her.

I found the copy of A Little Princess I bought for her when she was born. I’d read a few chapters on my own and then would give her a summary each day. It helped take my mind off of some of my pain and I spent time with my daughter who had missed me so much while I was away. Telling the story to my daughter reminded me of the joy of using one’s imagination. This revelation led me to pick up my pen (Yup, I’m old school) and create through my pain.

Oh! I forgot to mention, my daughter’s name is Sara. 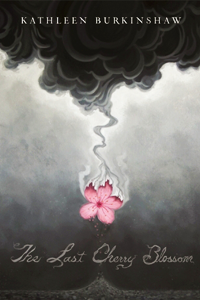 Yuriko was happy growing up in Hiroshima when it was just her and Papa. But her aunt Kimiko and her cousin Genji are living with them now, and the family is only getting bigger with talk of a double marriage! And while things are changing at home, the world beyond their doors is even more unpredictable. World War II is coming to an end, and Japan’s fate is not entirely clear, with any battle losses being hidden fom its people. Yuriko is used to the sirens and the air-raid drills, but things start to feel more real when the neighbors who have left to fight stop coming home. When the bomb hits Hiroshima, it’s through Yuriko’s twelve-year-old eyes that we witness the devastation and horror.

This is a story that offers young readers insight into how children lived during the war, while also introducing them to Japanese culture. Based loosely on author Kathleen Burkinshaw’s mother’s firsthand experience surviving the atomic bombing of Hiroshima, The Last Cherry Blossom hopes to warn readers of the immense damage nuclear war can bring, while reminding them that the “enemy” in any war is often not so different from ourselves.