Raise Your Voice 2016 with Anna-Marie McLemore

Raise Your Voice is a special annual month-long series on Pop! Goes The Reader whose purpose is to celebrate diversity and inclusivity in literature, with a particular emphasis on #OwnVoices stories. In it, authors recommend books with sensitive, positive and accurate representation that will help to create a resource of diverse books that marginalized readers can turn to when they need them most. Your voice matters. Raise it! For a complete list of the participants and their scheduled guest post dates, click here.

Anna-Marie McLemore was born in the foothills of the San Gabriel Mountains, raised in the same town as the world’s largest wisteria vine, and taught by her family to hear la llorona in the Santa Ana winds. She writes magical realism, and is the author of The Weight Of Feathers and the recently released When The Moon Was Ours. Her third novel, Wild Beauty, is forthcoming in 2017.

(You can add None Of The Above to your Goodreads shelves Here!)

They told me it was nothing to worry about.

They told me it was a common diagnosis in “girls like you.”

To this day I still don’t know what kind of girls they meant.

I went home, absorbed my panic by reading every page WebMD and Wikipedia led me to, and decided yes, I was fine, and no, no one had to know. My parents had the same confidence in me managing the symptoms as they did that I’d get my college scholarship applications in on time. And if it ever did decide to kill me, chances were it would have the courtesy to wait a few decades to do it.

When I fell in love with a transgender boy, my own complicated relationship with my body, the ways the struggles inside it made themselves visible, seemed minor. Trivial even, compared to what this boy I loved was living through. I ignored the humming noise I had almost gotten used to, those small things going wrong inside me.

The day I opened I.W. Gregorio’s None Of The Above, it was as a reader who assumed she had little in common with protagonist Kristin Lattimer apart from the fact that we were both girls. I was never a track star. I had never been homecoming queen, or even gone to a homecoming dance. And I didn’t have AIS (Androgen Insensitivity Syndrome), like Kristin does, or any of the other DSDs (differences of sex development) I’d learned about through the Transboy’s work. But Kristin’s worry that a diagnosis made her someone else, her fears of being a less-than girl, tuned in to a frequency I’d been ignoring.

We were both still the same girls as before. Kristin with her track shoes and her homecoming crown, no matter how her classmates chose to misunderstand her and her diagnosis. Me with my Irish dancing shoes and my grandmother’s locket, even if the jokes I heard as a teen made me so ashamed of my own diagnosis that most of my friends still don’t know about it.

But we were also not the same as before.

Kristin left me with truths I needed to know. Not just her diagnosis or the way she took it with her into the life in front her. But her, Kristin herself.

She reminded me that all these things could be, at the same time, true. 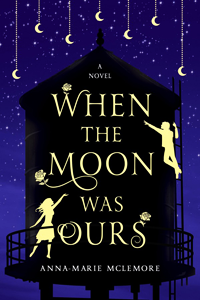 To everyone who knows them, best friends Miel and Sam are as strange as they are inseparable. Roses grow out of Miel’s wrist, and rumors say that she spilled out of a water tower when she was five. Sam is known for the moons he paints and hangs in the trees, and for how little anyone knows about his life before he and his mother moved to town.

But as odd as everyone considers Miel and Sam, even they stay away from the Bonner girls, four beautiful sisters rumored to be witches. Now they want the roses that grow from Miel’s skin, convinced that their scent can make anyone fall in love. And they’re willing to use every secret Miel has fought to protect to make sure she gives them up.