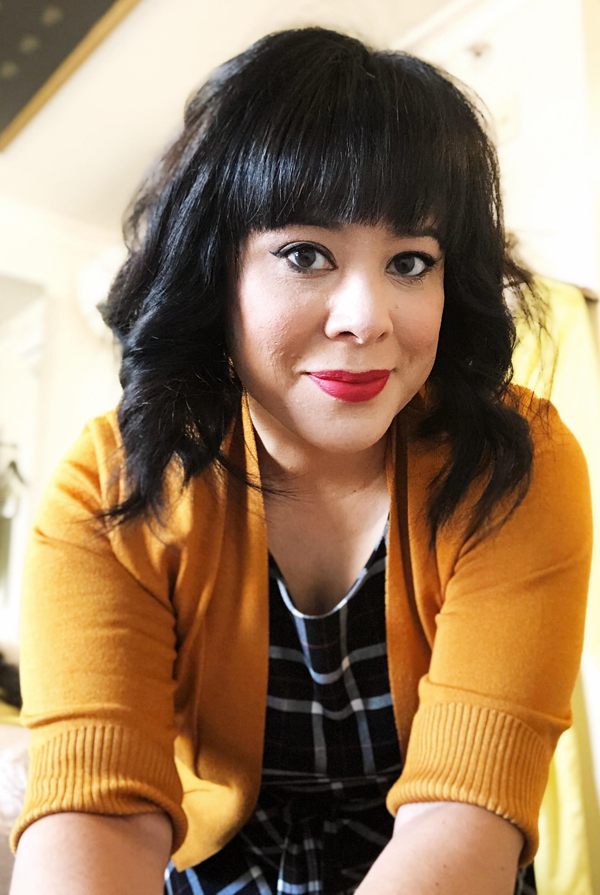 Erin Entrada Kelly received the 2018 Newbery Medal for Hello, Universe, the 2017 APALA Award for The Land of Forgotten Girls, and the 2016 Golden Kite Honor Award for Blackbird Fly, among other honors. She is a New York Times bestseller whose work has been translated into several languages. Her fifth book and first fantasy, Lalani of the Distant Sea, was named one of the best books of the year by the New York Public Library, The Horn Book, Booklist, BookPage, and others. All Erin’s books are Junior Library Guild Selections. Her next book, We Dream of Space, releases May 5, 2020.

If you’re lucky, your childhood is filled with magic. You keep your toes covered at night so the monsters won’t eat them. You put loose teeth under pillows and wait for fairies to arrive. Stories are planted in your imagination — either from school, family, fairy tales, or books — and they grow wild and free.

For many of us, Santa stood at the apex of our enchantment.

When you’re very little, the magic of Santa Claus isn’t magic at all. It’s just simple truth. Yes, a jolly, red-cheeked man delivers gifts to children around the world, whether those children have chimneys or not. Sure, he is led by magical reindeer. Certainly, he likes milk and cookies. Who doesn’t?

As we get older, however, the practical realities of everyday life push their way into our imagination. We ask questions. And if you were anything like me as a child, you ask a lot of questions. When I was in second grade, I wrote a letter to Mr. Claus. They were all questions. I was so preoccupied with questions that I forgot to ask for a gift. Why is Rudolph’s nose red? Is it still red? How cold is it there? How is Mrs. Claus? and so on. I wondered: How did he deliver all those gifts? How did they fit in his sleigh? How, how, how?

It wasn’t just Santa, either. The Tooth Fairy was also subject to interrogation. One night, recently toothless and full of skepticism, I left a note on my bedside. Dear Tooth Fairy — If you’re real, please answer the following questions: What is your name? Where do you live? How did you get here?

I’m considerably older now, debatably wiser, still skeptical. So, after all my years of research, I have to confront myself with cold, hard questions: Do I believe in fairies? And the Tooth Fairy? And Santa Claus?

Do I believe in magic?

If you’re an adult and you need a strong dose of charm to captivate your practical nature, I have remedies for you. Spoiler alert: They’re books, as are ninety-nine percent of my remedies. These stories are real enough to please the sad logics of your grown-up world, with just enough enchantment to remind you what it was like to believe in something.

In honor of Jacob Marley (you remember Jacob Marley, don’t you?), I present them here as your Books of Classics Past, Present, and Future. 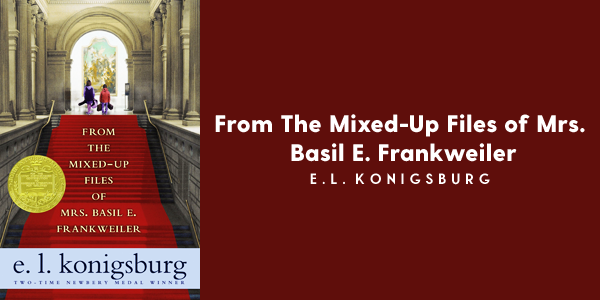 When I was a kid, I used to wonder what it would be like if I were trapped in the supermarket, toy store, library, or mall, all by myself, with nothing but my wits and freedom. You probably wondered that, too.

From the Mixed-Up Files of Mrs. Basil E. Frankweiler by E.L. Konigsburg (Atheneum Books, 1967) traps us in the most magical place of all: The Metropolitan Museum of Art in New York City, a.k.a. the Met. Twelve-year-old Claudia Kincaid has decided to run away from home to give her parents time to adequately appreciate her. (I was once a runaway, too. I packed a paper bag full of stuffed animals, wrote a note to my parents, and took off down the street in my Big Wheel. I only made it two blocks before changing my mind.) Claudia brings her nine-year-old brother Jamie along, mostly because he has money, and they live — briefly — in the Met, where they entangle themselves in an art mystery.

If you’re a grown-up who has lost your thread of imagination, I know what you’re thinking. How would two children live, undetected, in one of the most famous museums in the world, without being discovered, raising suspicion, or being otherwise apprehended? Put your adult brain aside and read the book. It’s only 162 pages, so after you’re finished being enchanted, you’ll have plenty of time to do your boring grown-up things. Like paying bills. Booo. 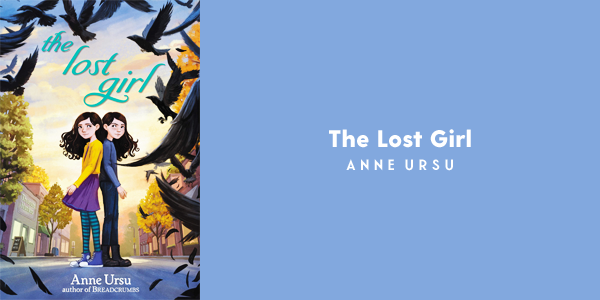 Anne Ursu hasn’t lost her magic. Anne Ursu remembers what it’s like to be a kid surrounded by boring, unimaginative grown-ups. The reason I know this about Anne Ursu (besides the fact that I know Anne Ursu, ahem) is because she wrote a book called The Lost Girl (Walden Pond Press, 2019). The Lost Girl is rooted in reality, but those roots constantly shift under the weight of mysterious magic.

The Lost Girl is the story of identical twin sisters Iris and Lark. Iris is rational and grounded. Lark is inventive and dreamy. Together, they complement each other, and they’ve never left each other’s side. In fifth grade, however, they are placed in separate classrooms.

Iris and Lark insist they are better and stronger together, but no one seems to believe them, not even when strange things start to happen. Iris loses her razor-sharp focus. Lark loses her dreamy imagination. Items in their house start to disappear — a bracelet, a set of house keys. But not just small trinkets. Big things, too, like revered items across their hometown of Minneapolis. Works of art. Sculptures.

The story is told by a mysterious narrator, and is populated by one of the most magical creatures of all: Crows. 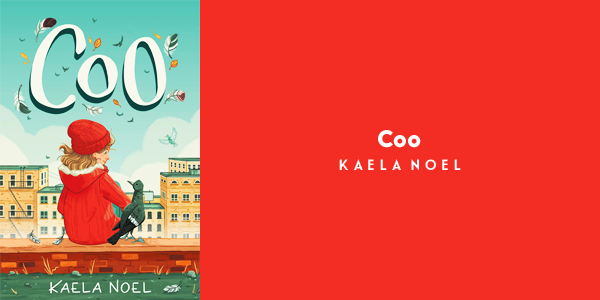 Coo by Kaela Noel won’t be released by Greenwillow Books until March 2020, but thanks to the magic of advanced reader copies, I’ve already read it. And hugged it. And gushed about it to anyone who will listen.

The story begins when a flock of pigeons encounter an abandoned baby in an empty lot. The pigeons decide to rescue the little human. Not all the pigeons think this is a good idea. Nevertheless, they lift her from the streets of New York and carry her to the roof, where Coo spends the next ten years of her life. She has no plans to leave her flock, but then a hawk nearly kills Burr, the pigeon she loves most. With Burr’s life in the balance, Coo is faced with an impossible mission to find Tully, a retired postal worker who rescues injured birds. Most New Yorkers consider pigeons a nuisance, but not Tully. Tully is kind and patient.

There are problems, of course. Coo doesn’t speak English, for one thing. (Though she does speak fluent Pigeon). Coo is also a ten-year-old girl who lives on a rooftop, which is certain to raise a few eyebrows. But Coo’s love for Burr is greater than her fear, so she steps out of isolation and into a strange new world.

Is your imagination running wild with joy at the thought of pigeons raising a young girl? Or are you asking grown-up questions, like: How would a flock of pigeons carry a girl? How could a girl live on a rooftop in New York City for ten years? How is such a story even possible?

Sometimes magical things are possible. If you believe. 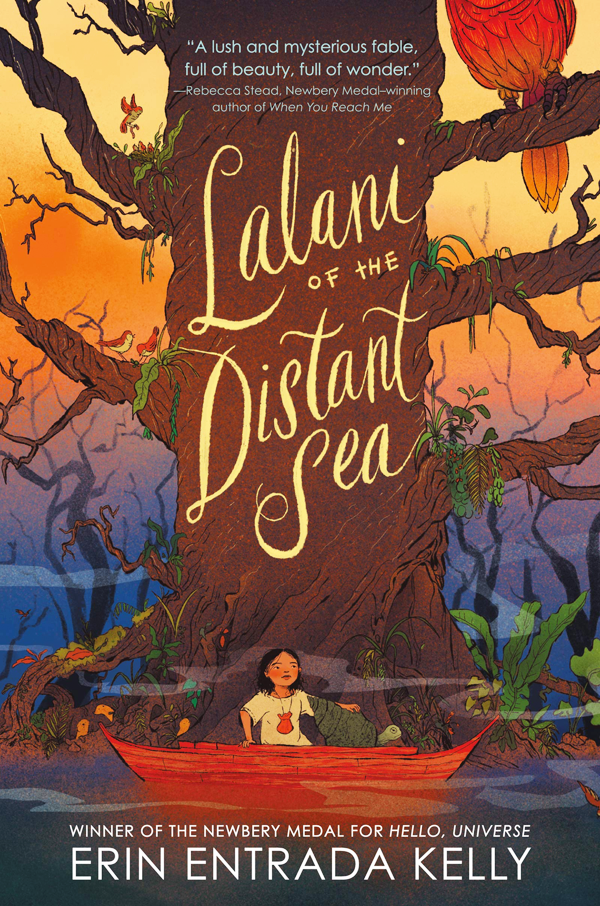 Newbery Medalist Erin Entrada Kelly’s debut fantasy novel is a gorgeous, literary adventure about bravery, friendship, self-reliance, and the choice between accepting fate or forging your own path.

When Lalani Sarita’s mother falls ill with an incurable disease, Lalani embarks on a dangerous journey across the sea in the hope of safeguarding her own future. Inspired by Filipino folklore, this engrossing fantasy is for readers who loved Grace Lin’s Where the Mountain Meets the Moon and Disney’s Moana.

Life is difficult on the island of Sanlagita. To the west looms a vengeful mountain, one that threatens to collapse and bury the village at any moment. To the north, a dangerous fog swallows sailors who dare to venture out, looking for a more hospitable land. And what does the future hold for young girls? Chores and more chores.

When Lalani Sarita’s mother falls gravely ill, twelve-year-old Lalani faces an impossible task — she must leave Sanlagita and find the riches of the legendary Mount Isa, which towers on an island to the north. But generations of men and boys have died on the same quest — how can an ordinary girl survive the epic tests of the archipelago? And how will she manage without Veyda, her best friend?

Newbery Medalist and New York Times–bestselling author Erin Entrada Kelly’s debut fantasy novel is inspired by Filipino folklore and is an unforgettable coming-of-age story about friendship, courage, and identity. Perfect for fans of Lauren Wolk’s Beyond the Bright Sea and Kelly Barnhill’s The Girl Who Drank the Moon.